32 Hours 7 Minutes is a feature-length documentary on the U.S. Express - the secretive outlaw race descended from the Cannonball Run - and the record set on its last run in 1983. despite the winning team's shocking 32:07 transcontinental record, the full story disappeared into the fog of Cannonball mythology and Burt Reynolds jokes... until now! 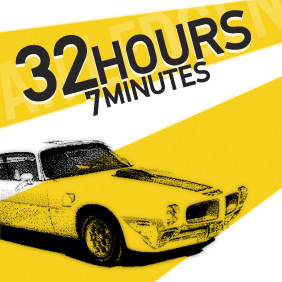